In February 2021, a massive snowstorm left millions of Texas residents without electricity. And while FEMA and other relief organizations are sending help through generators, blankets, and other supplies, several people are still seeking warmth and reliable shelter as another storm prepares to hit the region. As with any widespread emergency, especially one caused by a natural disaster, questions of what could have been done to better prepare — as well as a fair share of bureaucratic finger-pointing and assigning of blame — inevitably come to light.

Most recently, Texas Governor Greg Abbott attributed the sweeping blackouts across the state to the failure of renewable resources like wind and solar power, which combined represent less than 25 percent of Texas’ total energy output. His statement forwards a false narrative by many fossil fuel proponents that alternative energy sources cannot be relied upon in emergency situations.

Politics aside, the implication that solar energy cannot be counted on to power homes during the cold, snow-laden months is patently false. Yes, power production can decrease when a solar panel system is covered in snow; but with proper installation and maintenance, quality equipment, and the addition of solar energy storage, solar can prove to be even more reliable and energy-efficient than some traditional power sources.

Why can solar panels handle the pressure? 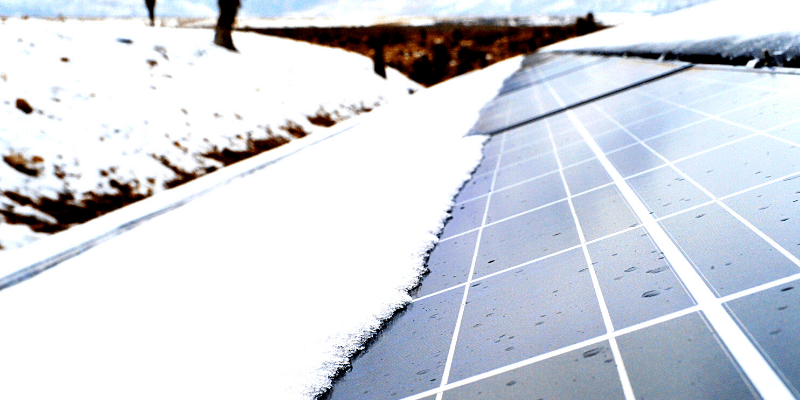 Many solar customers will naturally worry that a snowstorm will damage their panels and render them inoperable. Save in some extreme cases, solar users have little cause for concern. Modern solar modules are designed to withstand a static snow load of 5,000 pascals or more, which equates to two to four feet, and wind speeds up to 141 miles per hour.

Professionally installed solar energy systems are built with adverse weather conditions in mind; maximum sun exposure is not the only reason why solar panels are installed at an angle. Even though solar panels do not rely on heat to produce electricity, they still retain heat. So even if snow starts to accumulate on the solar panels themselves, the sloped design of the system, combined with the heat retention and sleekness of the panels’ surface are enough to cause the snow to melt and slide off.

How much power do solar panels produce in winter?

A common misconception about solar panels is that they rely on heat from the sun to provide electricity to the home and are therefore less effective in colder months; however, solar panels use light, not heat, to power homes. In fact, frigid temperatures tend to achieve more optimal output from solar panels than hot temperatures, and any loss in solar power in winter is more due to the fewer daylight hours and heavy snowfall than low temperatures. Snow surrounding the solar panels can also reflect more light into the cells even during low sunlight.

What is a temperature coefficient?

For example, Panasonic solar panels have a temperature coefficient of -0.26, per EnergySage, meaning the panels’ efficiency decreases by 0.26 percent for every degree above 25ºC. And given that the average efficiency of a Panasonic solar panel is around 21.6 percent, its true efficiency at say 30ºC (86ºF) would be closer to 20.3 percent. In other words, solar panels are more adept at producing energy in cooler weather so long as they get enough sunlight.

What do actual solar customers say?

Actual solar customers report similar findings with their own solar PV systems. For example, one Momentum Solar customer said, “our electric bill [was lower] even during winter.” A Sol-Up customer meanwhile said, “we are hardly paying anything in the summer because of [the energy savings] we banked in the winter.” And a Solar Optimum client reported that she paid nothing in utility fees during some winter months save a “connection fee of $10 plus $1 tax.”

How are solar batteries charging the game?

Although solar panel systems were built for extreme weather and thrive in cold temperatures, heavy snowfall can still interrupt the flow of power from the sun to the home. But a recent innovation in solar technology has allowed solar customers to not only harness energy from the sun, but store it for a rainy (or snowy) day.

“We are extremely excited about the adoption of lithium storage systems and the flexibility that comes with them,” says Oren Tamir from Ameco Solar. And he’s not alone. Nearly every solar company in America provides customers with this important system add-on that is quickly becoming a standard offering in the solar industry. Solar companies are quickly obtaining certifications to install battery solutions like the Tesla Powerwall, LG Chem, and Generac PWRCell.

(Battery) power to the people

Solar batteries are not only easy for companies to install, but they also provide customers with additional peace of mind, especially in the event of an emergency. Multiple Gimenergy customers had backup batteries installed as a way to prevent city-wide or neighborhood-wide power outages from affecting their systems:

“We signed a contract to get the battery with 26% ITC. I am excited to have more savings and never be afraid of power outages.” – Ivy Bell

“We did not do a battery installation with our solar system and had too many power outages last year. In 2020 we went back to gimenergy and asked them to add a battery to our existing system. Our solar system has been producing solar energy for almost a year now and the battery just got operational.” – M. Coudrey

“Just got our first bill. No electricity payment. Have not used the battery yet. However, excited to know we will have electricity during power outages.” – Madison Brown

“We have a solar and a battery system installed by Green Integrations and Management (Gimenergy). It took about two months to turn on the system. We have had a couple of blackouts already. It's amazing to have a battery during those blackouts.” – Sophia

Considering that our over-dependence on fossil fuels has been a leading cause of climate change (and accompanying erratic weather conditions), the need for sustainable, dependable forms of alternative energy is at an all-time high. Although it’s still a relatively new technology, solar power and storage can be both a reliable and efficient energy source — even in the wintertime. Solar panels have never been sturdier or more affordable than now, nor have solar installation companies been more qualified to build quality solar panel systems and battery systems. And, most importantly, their customers agree.