So a Vivint Solar guy shows up on my doorstep.

He introduces himself — we'll call him John — and, as with most salespeople, I have my guard up. But I have to admit: Ever since doing a series of articles on the virtues of solar, I've been curious about it.

In fact, we had been visited previously by a guy from a solar company called Blue Raven. He didn't really have any details about their services, failed to convince us, and never really followed up with us. End of story. Anyway, back to the Vivint Solar guy.

John asks if he can get a minute of our time. The answer is no. Dinner time at our home is strictly observed. But he can visit some other time. Remember, though, that this is December, so John is going to have some serious competition to get a spot on our calendar. We schedule for late December, just before New Year's.

As the scheduled appointment draws near, we don't actually feel like meeting with John during our post-Christmas hibernation, and we're off to do some fun family stuff and will probably be far too exhausted to sit and talk about something as taxing as solar energy, so we put it off again.

In fact, the appointment gets pushed off again and again, until finally, the stars align and we find ourselves sitting in our living room across from John. We're interested (but still testing the waters) and agree to have a Vivint technician come to our house to survey our roof, just to see how much power we could generate with a solar system.

The survey comes and goes-we barely noticed. And next thing you know, John and another guy from Vivint-he has a very reassuring, engineer-ish vibe about him-are sitting with us, showing us plans of where they would install the solar panels... 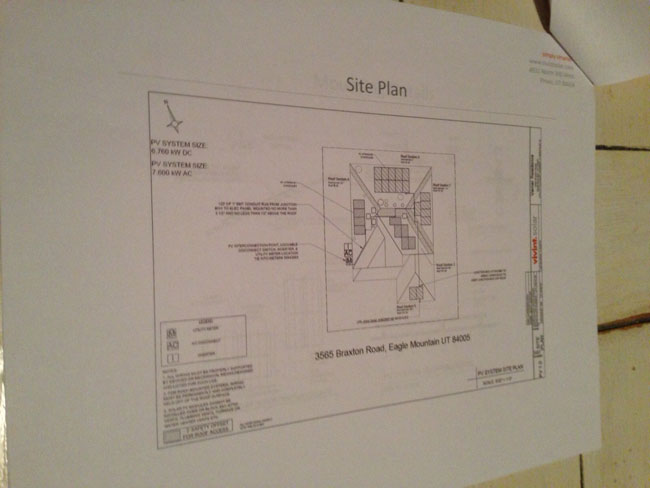 ...and showing us some mind-numbing graphs of how much power such a system could produce and how much it could save us every month. They whip out an iPad and we start filling out some kind of application and...

Fast forward a couple months and I just signed a loan for a solar system to be installed on my roof through Vivint Solar. Frankly, I'm still a little disoriented. On their website, this is how easy they make it look... 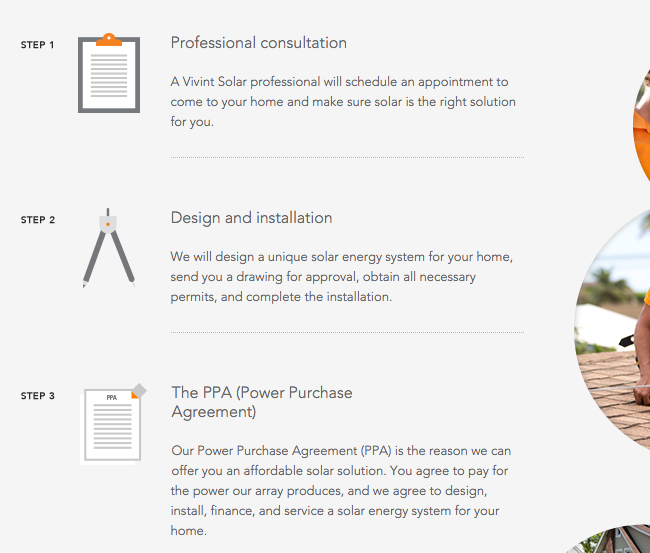 But the process and the explanations have been anything but clear. Honestly, I'm still wondering if I'm going to regret letting a crew of men screw a bank of big shiny plates to my roof, or regret taking on a big chunk of debt to pay for them to do it. Truth is, I've had a lot of questions throughout the pre-installation process. Most of them have been answered, but some still linger, such as...

1. Can I really trust these guys with my power needs?

No matter what any solar company says, getting a solar system on your house and understanding the benefits of it are anything but simple. From the beginning, John had a hard time helping us understand just where the promised savings were going to come from. There were fleeting glimpses of it, but it would quickly get swallowed up in the murkiness of the process. 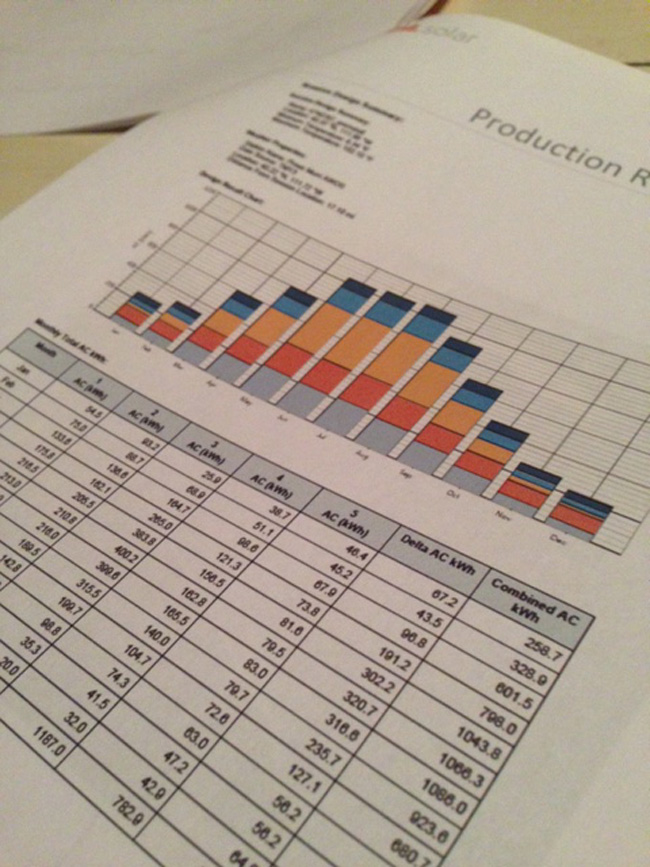 Even after they put a colorful printout with lots of graphs in front of you, it's still hard to keep straight just how the savings work out. Like if I'm at a party and I try to explain to people why I'm getting solar, I'm at a loss to connect all the dots, and they look at me like, "And you're still going to get it?" I wander away, scratching my head.

This pattern has continued throughout the credit application process-you know, the time when you really want things to make sense.

And then there is the out-of-place pressure to refer friends and neighbors. There was even a bright orange sign that appeared on our lawn without our consent. My house is located on a very visible corner right at the entrance to our subdivision, so I couldn't blame the guy for trying. Needless to say, I took down the sign, but not before I got a warning from the HOA reminding me that such signs are forbidden on lawns.

All of this has come together to create a feeling that Vivint Solar is a tad out of touch when it comes to helping customers understand what's happening and what's coming next. It creates a nagging lack of confidence in Vivint.

If this is how they are when they're trying to sell me, how responsive and understanding will they be when I need repairs done five years from now?

2. How will this affect my credit?

When you see the dollar figure, you can't help but pause. Our system, for instance, would cost approximately $26,000 before interest. That's the cost of a large vehicle. True, the loan is stretched out over 20 years and the interest rate is low enough. But you still have to wonder how such a large loan will impact your credit score. 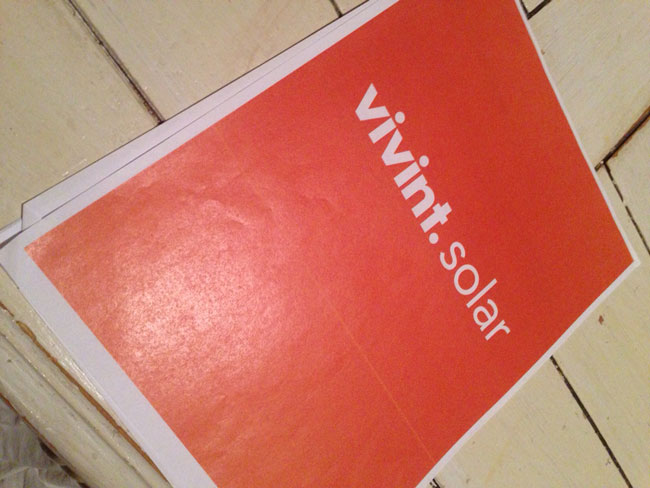 Luckily, I had a chance encounter with a Vivint Solar salesperson in training, who explained to me that the Vivint Solar financing arrangement never negatively impacts your debt-to-income ratio. Therefore, it never negatively impacts your credit score. Added bonus: as utility rates rise and your solar system saves you more money, it can actually bring your debt-to-income ratio down.

3. Is this really going to help me save on my electric bill?

Yes, "going green" is good and all, but this is really where the rubber meets the road for cost-conscious folks like me. Yes, Vivint Solar's testimonials page is full of cheery pronouncements of how much Vivint has saved satisfied customers, including this one: 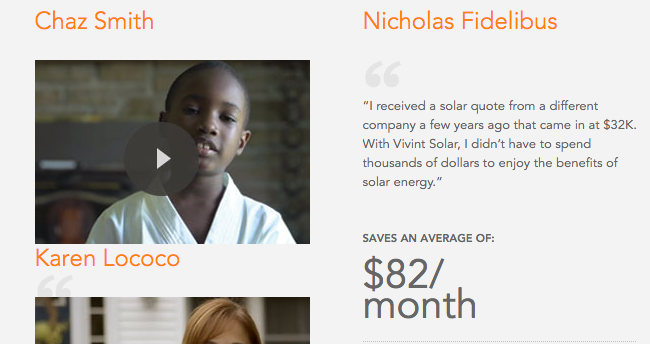 But how does this all translate into real savings? Clear answers to this question are curiously absent-or just hard to find?-from the materials we've received from John. 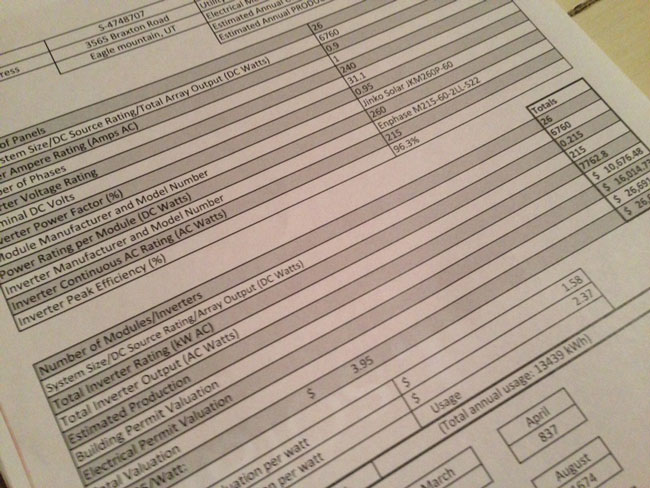 One prominent graph on the website and in the packet shows the cost of electricity on the grid going up year after year while the cost of electricity for people with solar stays pretty much level. This is where the savings really start coming into play, but what if you don't plan to stay in your home 10 or even five years? The next owners of your home will surely thank you.

Technically, it does save you money on your electric bill. A lot, actually. But whatever you end up saving on your bill, you end up paying for the financing.

This is how I understand it. Let's say, for demonstration purposes, that I'm paying $100 per month for electricity. Then I get a solar system which generates almost all the power I need; my monthly power bill shrinks to a nice $15. Awesome, right? But I also need to pay for the loan to put that system on my roof, which is $75 per month. So in the end, I end up saving only $10 per month.

The good news is, projections for my solar system show me saving up $40 total every money during some months and just breaking even during other months. And if my system fails to generate what it's supposed to and at least break even, Vivint Solar will send me a check for the difference. Also, I get a sweet $3,000 tax credit for investing in clean energy. I think.

4. How will the solar panels affect my home's resale value?

So the guy around the corner just completed his installation. And yes, it did take only a day per their advertised 24-hour installation... 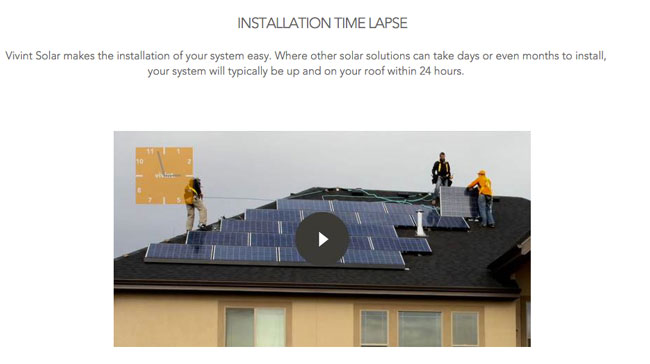 My neighbor's solar system is not what one might call "easy on the eyes." While beauty is always in the eye of the beholder, I'm having a hard time ignoring how those panels stick out like a sore thumb-and not in the good, "curb appeal" kind of way.

Sure, I'm willing to tolerate the panels on my roof because (I think) I understand the financial benefits they will bring, but what about people who just want a nice, ordinary home?

John and my wife subscribe to the belief that having a solar system on the roof and the promise of cheap electricity it brings will be seen by homebuyers as a big bonus. But I can't help thinking that not everyone is smart enough or as caught up on green technology to understand the benefits. Heck, I barely am. So I'm not so sure I agree.

Not listed anywhere in the materials provided by Vivint Solar and given just a cursory mention during one of our conversations, I have to go to bat with my HOA on behalf of Vivint Solar. It turns out solar is new to my subdivision, the HOA needs to residents to convince them that it's okay, yada, yada, yada.

This seems like a weird thing to ask of someone who isn't even a full-fledged customer yet, especially after you've just dropped a $26,000 bombshell in their lap. If Vivint Solar is going to promise to take care of everything for you-and they do promise this on their website-they shouldn't make you lobby the HOA for them.

I have no idea what happens next. I got approved for the loan. They made me send them a few documents via email. They approved the loan. I signed the loan and sent it back to them and then... silence. John hasn't gotten back to me. So the murkiness surrounding Vivint Solar continues. Will I wake up one day to find a crew drilling holes in my roof? Will it be next week? Next month? Only time will tell. John probably won't.

To see what happens when Vivint Solar finally gets ahold me, read the post "My Vivint Solar Installation: 7 Things to Expect."