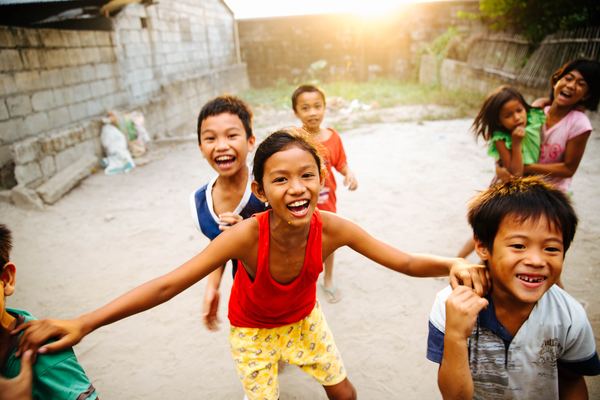 On the surface, it's hard to tell which charities are legitimate and which ones are just scams.

By their very nature, all charities seem to have worthy goals, helping third-world orphans or providing emergency medical services after natural disasters. Unfortunately, we also know that too many charities only use these worthy goals as covers, a means to collect money from unsuspecting donors and put it in the pockets of a few unscrupulous individuals.

A recent investigation uncovered more than 8,000 reported violations by charities in 38 states, and that 35 of the charities involved were allowed to stay in business and continue receiving donations even after being reported.

Thankfully, even with so many so-called charities misusing donations, the good news is, there are still so many well-run, honest charities out there that deserve your donations. One such charity is emergency relief organization Direct Relief.

According to their website, Direct Relief is on a mission "to improve the health and lives of people affected by poverty or emergency situations by mobilizing and providing essential medical resources needed for their care."

If you're considering making a charitable donation this year, here are five strong reasons you should consider donating to Direct Relief: 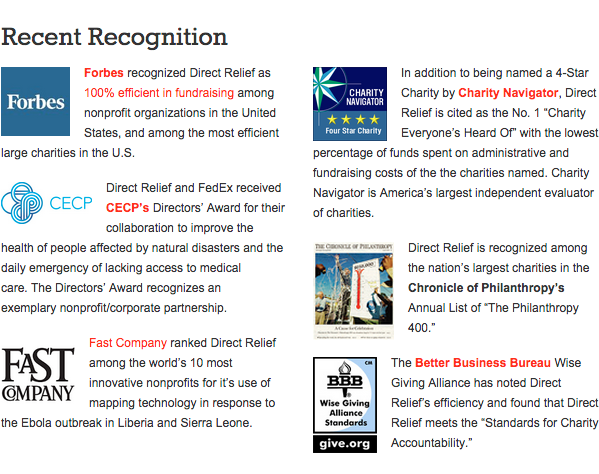 Few charities get this kind of praise. Any wannabe charity can pull the wool over the eyes of a few donors, but it's hard to fool the biggest experts and watchdogs in the industry. Again and again, Direct Relief has stood out among charities for its effectiveness and dedication to its cause.

Charity Navigator, which is widely regarded as the top watchdog in the charity industry, rated Direct Relief as the number-one "Charity Everyone's Heard Of" for having the lowest percentage of funds spent on administrative and fundraising costs.

Forbes also recognized Direct Relief as one of the most efficient charities in the U.S. for its 100% fundraising efficiency.

Direct Relief has been similarly recognized by Consumers Digest and The Non-Profit Times for its uncommonly high efficiency.

So what do all the accolades have to do with your donation? They mean you can rest assured that your donation won't be wasted on lavish fundraisers or executive retreats; they will be used more wisely than at any other charity out there.

2. Direct Relief is absolutely transparent in how they use donations.

One of the things this charity does best is keeping donors updated on how their donations are being used. One outstanding example of this is their website's interactive "Aid Map," which lets visitors see which countries Direct Relief has provided services in, how much they've spent in those countries, and how many facilities they have there, and then view specific stories about the work being done there.

Their site also features a host of other interactive maps that show visitors where Direct Relief is applying their funds in the form of HIV rapid test kits, U.S. medical clinics, relief for the 2011 Japan earthquake, and more.

Aside from being a nifty way to show what Direct Relief is accomplishing, these features and more demonstrate this charity's commitment to not only raising funds, but keeping their donors in the loop about the good generated by their donations.

3. Direct Relief has all the right licenses, memberships, and credentials.

If you ask some so-called charities for proof that they are legitimate, they will change the subject. Direct Relief, on the other hand, has gone the extra mile to ensure that it has all the right credentials, licenses, etc.

For example, Direct Relief is a member of all the leading charity associations, including NetHope, InterAction, and The Healthcare Distribution Management Association. Just to be a part of these organizations means that Direct Relief has met certain requirements.

Direct Relief is also approved by the IRS as a tax-exempt organization. This means that donations to them are officially tax-deductible, and they can prove it. Less reputable charities will try to convince you that they are tax-exempt when they really aren't.

In addition, Direct Relief is:

This is only a sampling of all the credentials Direct Relief brings to donors, but they send a clear signal that their charity has higher standards and credibility-and that your donations are in good hands with them.

A number of organizations can ship supplies and personnel to troubled areas, but how many charities can say they're the most innovative in the world?

This year, Fast Company ranked Direct Relief among "the world's most innovative nonprofits" for its response to the Ebola outbreak in West Africa:

"Direct Relief, answering a request from the Liberian Ministry of Health and Social Welfare, used an interactive mapping system to show where the Ebola cases were, where the clinics were, and where Direct Relief had sent protective gear... the mapping and data collection allowed the group to track the spread of the disease and identify where help was needed."

Direct Relief was also recognized recently for its ongoing partnership with FedEx to get supplies to people in crisis faster:

"In the U.S. alone, more than 10 million people have received over $400 million in needed medications - all delivered by FedEx. In November 2013, FedEx provided Direct Relief an emergency airlift of medical supplies to care for 250,000 people affected by the typhoon in the Philippines."

Direct Relief is known for taking an innovative approach to the challenges they face. To us, that translates to a promise that they will always find better ways to stretch your donation to accomplish more good.

A Relief from Shady Charities

In a world filled with too many fraudulent charities, Direct Relief is an organization where donors can place their trust. Of course, they are one of a solid list of charities that are highly rated by bestcompany.com. By looking for signs like reputation, licenses, and memberships, you can identify those trustworthy charities and ignore those that aren't.