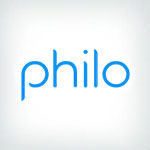 Philo was named in celebration of Philo T. Farnsworth who invented the electronic television almost a century ago. Philo launched in 2017 as an entertainment-focused live TV streaming service. Philo is an up-and-coming competitor in the live streaming industry.

Most of the other live TV streaming options cost at least $40. Philo costs half that at $20 per month. This $20 plan gets you 58 live channels, unlimited cloud DVR, and an on-demand streaming library. For those who want to cut the cord on cable TV and are focusing on keeping their live TV subscription cost low, Philo is a great option.

Philo offers live TV to watch your favorite shows now or cloud DVR so that you can watch them later. Philo allows you to record as many episodes of as many shows as you want. These episodes or movies will stay recorded for 30 days.

Philo TV allows one account to have up to three streams watching different things at the same time. This means that you can watch one thing while two other people watch two other things. This isn’t limited to three streams in the same household, so you could share this account with family or friends who don’t live with you.

You can test out Philo TV for free for seven days. You can start your trial with only your mobile phone number. This is used to confirm you’re a real person and limits free trials to one per phone number. This is comforting to those who are worried that they’ll forget to cancel the trial and be charged for the subscription. After 48 hours (two days) of free trial with only your phone number, you can then provide your credit card information to get another five days free.

Originally, Philo TV was only available to watch with Roku. Now it has added more compatible devices, but the list is still not as long as those of other streaming options. As of July 2019, Philo TV can be watched with the following:

Philo says that more devices are coming soon. Philo is not compatible with game consoles, other smart TVs, or Chromecast. Philo has a mobile app for both iOS and Android. As with all streaming services, you’ll need high-speed internet.

Only One Plan Option

Other streaming TV services offer several plan options depending on your needs (more concurrent streams, more channels, better quality, etc.), but Philo only has one plan option. Philo doesn’t have flexible options to choose from. What you see is what you get.

Although Philo TV offers nearly 60 channels, the channel lineup isn’t very diverse. These 60 channels include three channels from Hallmark, three from MTV, and four from Nickelodeon. Philo doesn’t have any sports channels and has very limited news channels. Philo TV doesn’t offer popular networks like CBS, CNN, Disney Channel, FOX, or TNT. Though Philo offers plenty of entertainment channels for the price, it isn’t a good option for a sports fan or news junkie.

For those looking to watch TV without a cable subscription, Philo is a good option. Although there are very limited sports and news channels, Philo still has a good library of entertaining content and is a streaming service that is giving bigger companies a run for their money.

We tried this out for a few weeks. It had some good content, but pretty limited.

I have used Philo TV to watch television shows that are only shown on cable. I like the option of watching previously viewed shows. I also like that they air games shows from Game Show Network. However, it is a little expensive compared to other services.