The hype is real!

Disney Plus has officially launched, and Disney fanatics are going crazy over the expansive collections of titles available and the user-friendly interface.

But many consumers are asking themselves some hard questions:

Do I sign up for Disney Plus and cancel my other subscriptions?

Do I keep my other subscriptions and sign up for Disney Plus?

It is a tough decision for sure, so read on to find out what you need to know about Disney Plus to decide whether it is a wise investment for you and your family.

How does Disney Plus differ from other streaming services in the following areas?

Disney Plus comes at a competitive $7 per month compared to its rivals at Netflix and other streaming services which start at $9 per month. Consumers can stream movies, shows, and originals from Marvel, Star Wars, Pixar, and its own studios as well as a library of vaulted classics.

Consumers can also choose to prepay for a year-long subscription of $70, making it a little less than $6 per month for Disney Plus.

However, for those Hulu and ESPN lovers, you will love this. If you sign up for Disney Plus, you can pay a whopping $13 per month on a bundle of Disney Plus, Hulu, and ESPN! This way, kids have the more filtered and family-friendly content, parents get the more adult shows, and sports lovers still get their ESPN fill.

For those who are true Disney fanatics and are annual passholders, there are several different discount options especially for you making your Disney plus monthly plan as affordable as $40 per month.

Here's what the experts have to say about it:

“Disney+ has already crossed 10 million subscribers on its first day, and we think it will only grow from there. At $6.99 per month, it's one of the most affordable streaming services available. Furthermore, Disney is offering bundle pricing with ESPN+ and Hulu for just $13.99 a month. Disney will even credit the cost of a $5.99 Hulu subscription back to existing Hulu subscribers if they sign up for the bundle.

That low price creates a minimal bar for entry to the Disney+ service. Considering Disney owns massively popular intellectual properties like Star Wars, Marvel, Pixar, along with its own Disney branded content, many will be hopping on this service. In 2019, half of the top box office movies were released by Disney. Disney plans to have its movies exclusively available on Disney+. No other streaming service commands that type of exclusivity when it comes to blockbuster films. That alone is reason enough to chose Disney+ over other on-demand streaming services.

Once the public sees they can only see Star Wars, Marvel, Pixar, and Disney films after their theatrical release on a $6.99 per month streaming service, we'll see an explosion of new Disney+ subscribers after each Disney box office hit.

And newly released films are just one driver of subscribers for Disney+. The service has its own original content like the new Star Wars series The Mandalorian, along with a massive backlog of almost 500 classic films and 7,500 television episodes. Services like Netflix, Prime Video, and HBO Now will still have their place, but they are going to be making a lot of room for Disney+.”

"With so many internet streaming services competing for your money, the choice for which ones to sign up for has never been tougher, but Disney+ is a worthy contender to be added into your binge-watching budget — or at least it might be in time.

As far as cost goes, Disney+ is certainly one of the least expensive available for the sheer amount of popular content that you get for it. Just being able to watch from Disney’s massive library of animated and live-action content with big names like Star Wars and Marvel in the mix for only $6.99 a month would be impressive enough. But with access to 4K Ultra HD movies, up to four simultaneous streams and up to 10 devices registered at a time, Disney is seriously gunning for the position of best value in streaming, considering that you need a $15.99 Premium subscription to get those perks from Netflix." 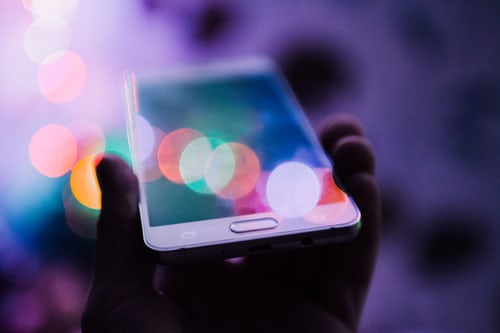 “Disney+ can’t compete with other streaming services when it comes to original content at the moment. While there’s a ton of high-profile series in the works for the following years, right now only four — including the new big budget entry into the Star Wars universe, The Mandalorian — are available. Episodes also seem to be uploaded on a weekly basis, so if you’re looking to really sink your teeth into a new series, you might be stuck waiting for a while. There is also currently no way to adjust the streaming quality of what you’re watching, so you may end up eating through your mobile data very quickly if you’re watching on the go.

Of course, there’s more than enough content to keep you satisfied while you wait. One of the best ways to find new content through Disney+ is through the “Explore” feature which curates TV and movies from a particular genre. My personal favorite is the 'Disney Through the Decades' collection, which has all of Disney’s animated and Live Action content currently available through the service sorted by order of their release, starting from 1928 with Mickey Mouse’s debut short Steamboat Willie. Adding new content to your watchlist can be a clunky experience though, since you have to click on the item of interest and hit the add to playlist button. Going back and forth between menus can end up being a nuisance if you just want to quickly fill up your streaming queue.

Only time will tell if Disney can use a little of their magic to turn this, admittedly already impressive, pumpkin into the carriage that will take them to the top of the streaming TV industry, but if you’re remotely curious about the offerings of Disney+, it’s a good enough value to check out for yourself."

“ It also allows for four simultaneous streams on four separate devices, more than enough to keep all your kids entertained at once. And with unlimited downloads, it's useful during the holiday season with traveling. You can download content for your kids and not have to access Wi-Fi for streaming on the road." 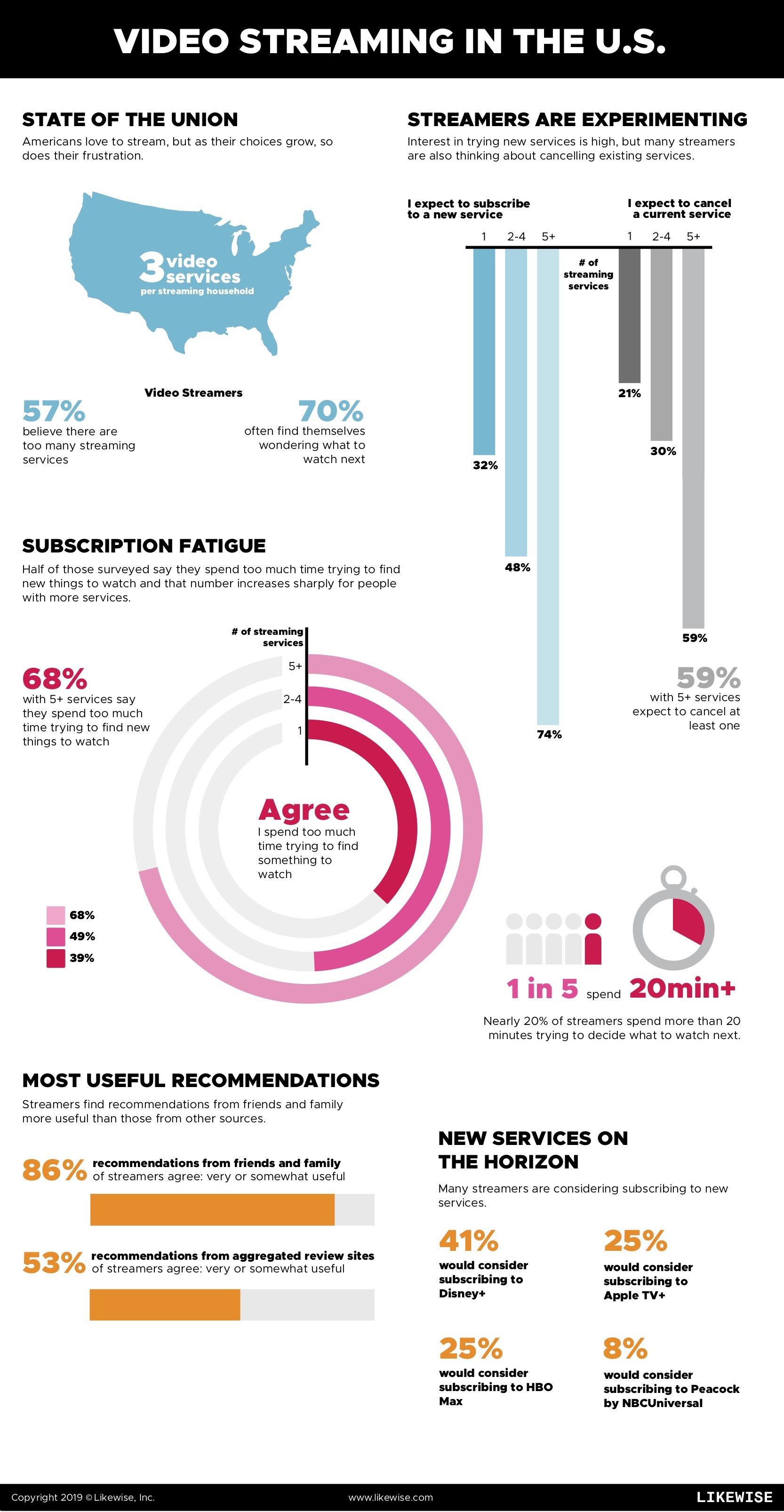 “Disney+ really is the ultimate streaming service for families. The library is packed full of new and old Disney, Marvel, Star Wars, and National Geographic content. And unlike Netflix and similar services, parents never have to worry about their kids stumbling across adult content; the service caps ratings at PG-13.”

On day one of the Disney Plus launch, Disney hit 10 million subscribers, which beats all other streaming services by miles. These subscribers enjoy four simultaneous streams at the same time. Netflix doesnt even allow for this until you reach the $16 per month tier. Almost all content is entirely downloadable up to 10 mobile or tablet devices. But there are unlimited downloads for offline viewing, so you can enjoy your movies and shows from wherever you are. Keep your family busy while shopping, traveling, and waiting in lines for the doctor.

In fact, Disney made a deal with Verizon to give their wireless carriers one free year of Disney Plus.

Disney Plus also allows users to have up to seven profiles for the entire family to enjoy Disney Plus and select their own favorite content to enjoy. Over 200 different avatars exist for all users to customize their experiences on Disney Plus.

New research conducted by Likewise on the streaming landscape is presented in this infographic: 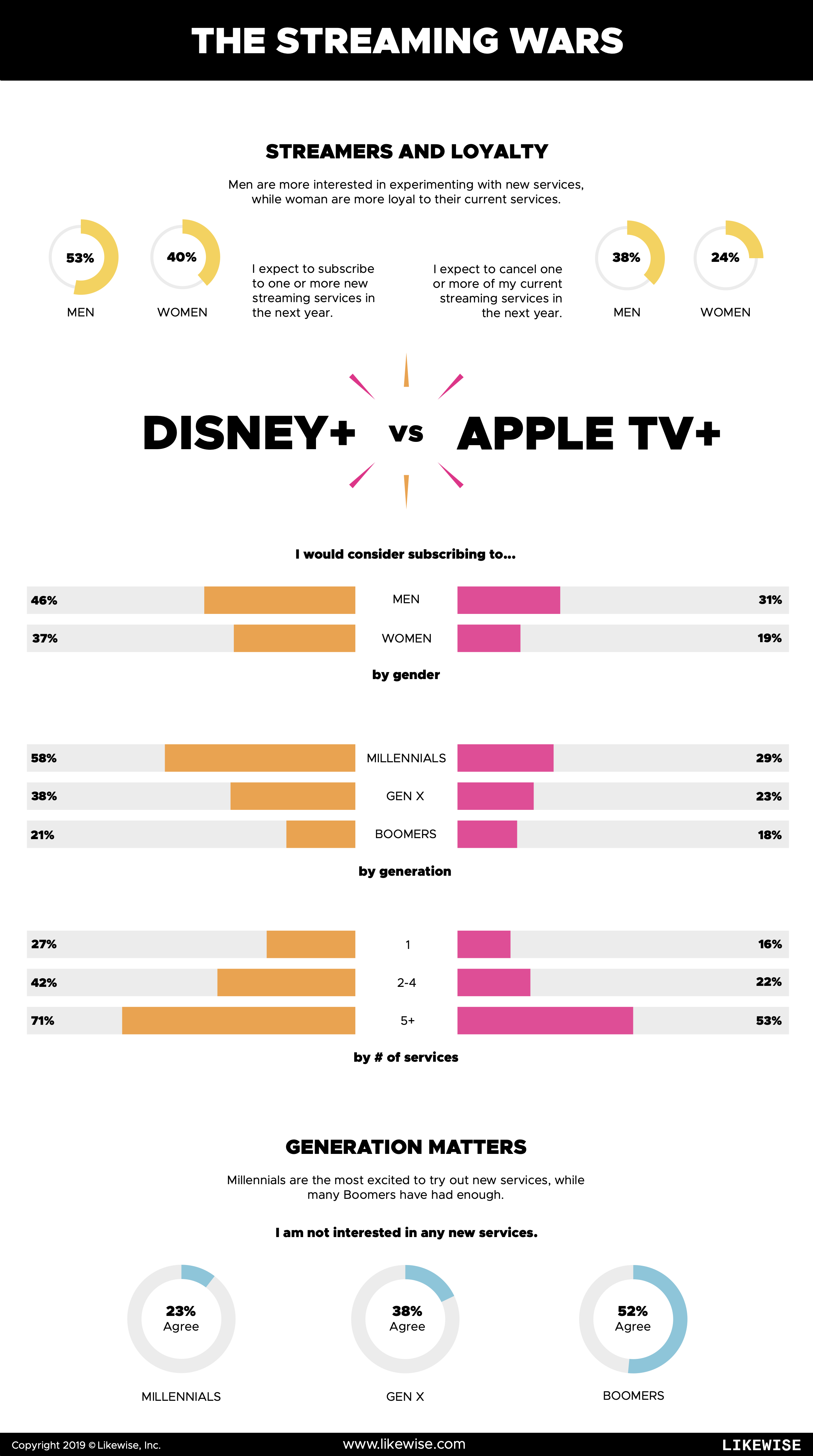 Both infographics used with permission from Liv Allen, Codewordagency.com

"Disney+ stands out from other platforms because of the amount of quality content they have in their vault. While some streaming platforms are trying to play catch-up and put out as much content as possible, regardless of quality, Disney is able to immediately compete with mass amounts of quality titles.

With the number of options in the marketplace, consumers are starting to weed out where they spend their dollars. Large players such as PlayStation Vue have already tossed in the towel."

Disney Plus has a wide selection of features and benefits for a lower price compared to its competitors. Only time will tell what happens next in the streaming world!

Maybe it’s your first time binging or maybe you’re a veteran at it but are ready to take your viewing exper...

The streaming TV industry has grown dramatically in the last decade. “Cord cutting” (opting for no cable or ...