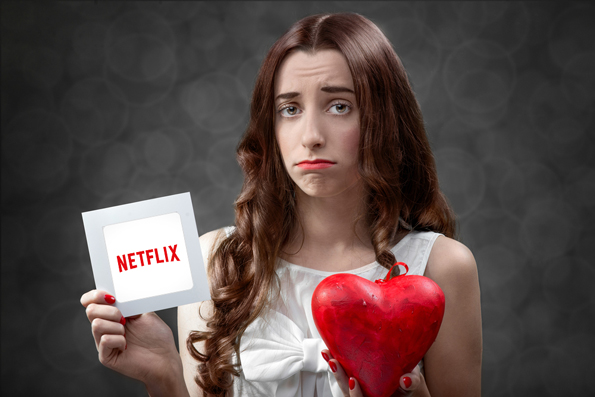 Like most of the civilized world, I've spent a lot of time with you lately. Which is why the following rant is going to seem out of place, even hypocritical.

Netflix, my relationship with you comes down to this fact: for all the convenience you deliver, for the hours of content you serve up more than I could watch in a lifetime, really-you can never duplicate the satisfaction and emotional connection I felt with my local video rental store.

It's not that I'm not grateful. You've made it possible for me to rewatch all those episodes of Star Trek: Deep Space Nine that meant so much to me as a teenager, but which I would never pay for now as a boxed set. You've given me Daredevil, which I regard as the best Marvel movie to date. And I will continue to take advantage of the endless casual viewing you make possible.

But as much as it hurts me to say it, despite your eagerness to please, all the enthusiasm with which you've tried to fulfill my needs, my heart will never belong to you. And this is why...

And then you, Netflix, showed up.

When you started mailing out DVDs in 1999, I thought nothing of it. Yes, the spontaneity, the serendipity, and the invaluable video clerk were conspicuously absent from the proceedings, but you seemed an acceptable extension of the video renting I'd come to know and love. Almost any movie I thought up I could find in your database and order up to watch in a few days. Even as you baffled the public with your bold plans to switch to streaming movies and TV shows, I simply accepted it as a convenience.

It wasn't until 2014, when Blockbuster Video announced that it would be closing its stores for good, that I realized what you had done. This realization came too late. The neighborhoods of America had been scrubbed clean of any trace that video rental stores had ever existed. My favorite Blockbuster was shuttered for a few months, only to emerge from its renovation chrysalis as a second-rate Taekwondo studio.

Drawn in by the convenience of streaming video, by 2015, I had become one of the 50 million people stuck with whatever movies and TV shows you, Netflix, saw fit to serve to me. Emmy-winning original shows and vast library aside, you had robbed me of something precious. For instance...

You, Netflix, are heavy on quantity, light on quality

Video rental stores had every major release on their shelves, no matter what studio they came from, and they had them going back years. You, Netflix, on the other hand, have only a smattering of films that could be considered quality major releases mixed in with a steaming heap of straight-to-DVD B-movies.

For instance, your current recommendations for me include such well-known blockbusters as:

To be fair, you've mixed in there recognizable fare like GI Joe: Retaliation and Catching Fire. So your recommendations aren't a total bust.

I know, Netflix, this isn't totally your fault. After all, you take what you can get. And if a big studio isn't willing to play ball with you, then you're stuck with too many Big Ass Spider-level films and not enough Marvel or LOTR movies. Occasionally, you can pull in the big classics, like Fantasia, Rocky, Breakfast at Tiffany's and Apocalypse Now, but those are usually sandwiched in between every Roger Corman B-movie ever made. And when a studio wants to push one of their big franchises, they'll let you show their good stuff for a limited time.

I get it, Netflix. When it comes to getting the rights from studios, great/popular movies are expensive and bad movies are cheap. But it definitely makes for a lackluster media experience.

Most of the time, I end up watching not those shows and movies that I'm honestly excited to see, but those that are left over after I've burned through the one or two good ones. They're the movies I wouldn't, in a million years, rent from Redbox or (sniff!) Blockbuster, but I find myself watching them simply because they're there and I can't stand silence. And I haven't even gotten started on the ridiculous heaps of reality shows that litter my Netflix recommendations.

Inevitably, you make me feel tainted, like my good movie sense has been corrupted, and I am left to wallow in my shame.

You can't because you don't actually watch your content. You rely on tags, user behavior, actors' names, and how many stars the lay viewer assigns to a given show or movie. But you yourself have never actually watched a single one of these pieces of content.

Which brings me to the feature of video rental stores I miss the most: the video clerk.

Ah, the video clerk: the video rental store's equivalent of a dungeon master. When the video clerk wasn't serving customers or rewinding tapes, he was consuming video after video, constantly expanding his movie knowledge beyond that of mere mortals. In this way, the video clerk secured his place as the neighborhood authority on all cinema. Best of all, he was a human being who had digested cinema with an eye for acting, cinematography, editing, art direction, story, and character development and an ear for music and dialogue. (Imagine a young Quentin Tarantino working behind the counter. After all, this is where Tarantino learned his craft.)

Contrast this with the way you, Netflix, make so-called recommendations and there really is no contest. You just can't replace the endless, human intuition and wisdom of a video store clerk with a fancy algorithm.

Netflix, you're incapable of generating serendipity

You know, that moment when you discover something wholly unexpected and outside your typical media diet but wonderful and eye-opening?

Video rental stores did this the same way libraries do. Sometimes, you went in with a specific movie in mind, but other times, you just roamed the rows and rows of shelves looking for something that caught your eye. The selection included movies that had recently been in theaters, as well as the classics and artsy indie movies.

Best of all, mixed in with those were pockets of strange movies with bizarre covers and movies my parents would never allow me to watch. There were movies in other languages. And every now and then, there was that one video that you knew nothing about but had the most irresistible cover art. Sooner or later, you knew, you would have to rent that movie just to find out if the contents matched the grandeur of its packaging.

This environment was ideally suited for movie selection serendipity. Sadly, you, Netflix, are not.

You shove in my face films and shows based on tags attached to the stuff I watch, whether or not those tags are the actual reasons I watched that stuff. You shove it in my face based on the assumption that what I wanted to watch yesterday is what I want to watch today.

In any case, your algorithm is so deliberate that it is incapable of surprising me. It's incapable of duplicating that video rental scenario where I stumbled across a video that was completely outside of what I normally watch but ended up forever broadening my media experience.

Netflix, it's not you, it's me

This isn't to say that there aren't a lot of things that I really like about you, Netflix. You make it easy to watch stuff. You're cheaper than cable. I don't have to worry about getting your movies back to a store in time. So why do I still find it so hard to love you?

Maybe it's because the death of video rental stores (you know, the ones you killed) left a hole in my heart so big that it will never be filled. Yes, I crave an intuitive, human-powered media discovery experience. I crave a comprehensive selection of high-quality films and shows. I crave a human guide to lead me to great, new finds. And you, for now, can't give me those things I crave.

Not that I blame you.

Ultimately, Netflix, it's not you. It's me.

Sign up below to receive a monthly newsletter containing relevant news, resources and expert tips on Streaming TV and other products and services.