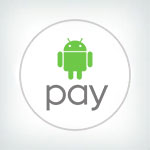 star star star star_border star_border
5 User Reviews
Compare
Compare
Good
Bad
Bottom Line
Reviews
Write a Review
LAST UPDATED: April 22nd, 2021
Android Pay is the default mobile wallet app for Android users. It comes pre-loaded on many Android phones and is easy to download from the Google Play Store if it is not a pre-loaded app. Being that Android Pay is a part of the Android family, it provides the same support Android users are accustomed to. From their help website, users can request support via live chat, email, or by requesting a phone call. This mobile wallet allows users to make purchases with their phone using their choice of many of their existing credit or debit cards. The card information is as easy to enter into the app as taking a picture. Android Pay is very straightforward and allows users to make purchases at a large number of merchants with a contactless payment app.

Available in Many Locations

Android Pay is available at over a million retail locations in the U.S. Many of the locations which offer Android Pay as a method of payment include stores which are those which customers visit regularly, such as: In addition to the list above, any store that accepts NFC transactions will be compatible with Android Pay. Android Pay may be used at any location with their logo displayed. Those using Android Pay also are able to make purchases in thousands of different apps. This is an added convenience which not every mobile wallet is able to provide. Along with the number of locations that accept Android Pay, there are a number of financial institutions that are compatible with Android Pay. These include the top credit and debit card issuers in the U.S.: American Express, Visa, MasterCard, and Discover. The app works with most cards from one of the following banks or credit unions: Android Pay is comprehensive in its offerings and is one of the mobile wallet apps reviewed by the Review Team which is truly capable of replacing much of one's physical wallet - as far as credit or debit cards go.

The payment process for using Android Pay is much simpler than swiping a card. To begin using Android Pay, eligible cards must first be added to the app. This can be done by taking a picture of the card or manually entering the information. The first card entered will be automatically assigned as the "default payment card" and all purchases made with Android Pay will charge to this card unless users change their default card. This is done easily by opening the app, selecting the new desired default card, and selecting "set as default card." Payment can be completed with any card which is stored in the app by simply opening the app and selecting the card at the time of purchase. The user does not need to be in the app to make payments with Android Pay. To make a purchase, all that needs to happen is to unlock the NFC phone and hold the back of the phone to the contactless payment terminal. If asked, the user needs to always select "credit," no matter what type of card is being used. The transaction will then be completed and will show up in the Android Pay app to review the details. Android Pay allows users to continue to earn rewards on their eligible rewards credit or debit cards. Users may add physical gift cards to their Android Pay app as well and use balances stored at many retailers which accept contactless payment with Android Pay.

Android has a few different security measures in place to keep their users safe from fraud. If the user does not have a lock screen enabled on their devie, the app requires for this feature to be active. Android Pay stores all payment information on secure and encrypted servers. Financial information is not stored on the phone, nor is it shared with merchants. When making purchases, a virtual account number is used rather than the actual card number. This way, the card information is not stored on the phone and is not being passed to different merchants. As soon as a purchase is made, payment details appear on the app so that the user can confirm and be sure that they are the ones that made the different purchases. With Android Device Manager, the users are able to lock their phone from anywhere, secure it with a new password, or wipe it completely clean of information if the device is ever lost or stolen.
thumb_down

Android Pay is accepted at many locations and compatible with many financial institutions. However, it is not supported by a large number of devices. Most conspicuously, an iOS user cannot use the Android Pay app on their Apple devices. Windows phones are not compatible either. Android Pay is only compatible with devices running Android KitKat 4.4 or higher, it also needs to have NFC and HCE support. Because it is a specific type of phone, and only newer versions of that phone, only specific Android users would be able to use Android Pay, and not anyone with a mobile device.

Interestingly, customers have complained about the security feature of having a forced lock screen on their devices, saying that the feature is not appealing to them, nor is it something which they want on their device. Aside from allowing customers to continue to earn with their various rewards credit cards, members do not earn rewards or incentives for using Android Pay.
gavel

Android Pay is an easy and safe option for a mobile wallet for Android phone users. This mobile wallet is widely accepted at over one million retailers nationwide and is continually gaining market share as more merchants accept it. The added functionality of being to use Android Pay inside of mobile apps for purchases is appealing to many. Additionally, since the app generated a virtual card number for every purchase, there is additional security available to its users. This app is recommended by the Review Team as a digital wallet for Android users, with the acknowledgment that some older devices may not be able to run the software due to OS limitations and that this app is proprietary to Android, not being available to those with a Windows or iOS device. It is available at over a million locations and will soon be available in thousands of apps to make purchases. The payment process is easy, just placing a phone by the contactless reader, and with the virtual account number, no financial information is being transmitted which helps keep the user safe from fraud. There are a number of cards and banks that are supported by Android Pay and can make carrying a wallet around a thing of the past.
Was this content helpful?
thumb_up Yes thumb_down No
border_color Write a Review

If you have an Android phone and you want to pay with ease, this is what you should use. All you have to do is hook up your card info, then you can tap to pay with many restaurants and things that use NFC capable payment.

This is an alright feature. But it's not acceptable every where. And some retailer's don't lnow how to use a smart phone in regards to excepting payments from one.

App is default installed on my phone and I cannot get rid of it. It constantly keeps sending me notifications even though I have marked it to not do that. I tried using the app but it never properly completed transactions so I stopped using it and can't seem to get it to go away completely.

this is an app forced on the user , i do not own and i dont want a credit card.if you want to be safe buying online go to walmart and buy a card with the amount you want to spend only! useless app and a security risk.