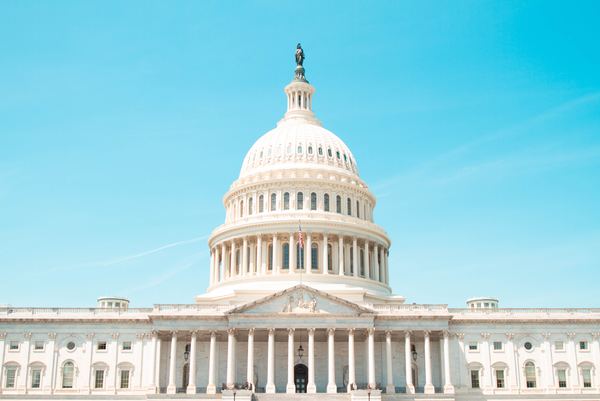 Policymakers are scrambling to concoct a solution to the U.S. student debt crisis — it’s an over $1.5 trillion problem that’s halting the economy. And while many citizens are banking on the 2020 ticket to make their voices heard on this issue, it’s going to take more than one elected official to address the difficulty.

In fact, several officials and experts have been proposing changes and have some brilliant (and sometimes not-so-brilliant) solutions. With the student debt crisis gaining visibility and urgency, a larger pool of experts are encouraged to deliver more creative proposals.

But it’s likely that many Americans haven't heard of these ideas or even studied the proposed solutions to address the crisis. What’s more, the most visible proposals to tackle student debt won’t always be the most feasible. Americans should be investing time in researching the student debt issue and their personal stance, as it is becoming a key campaign platform for many political representatives.

The House and Senate are swimming in a deluge of proposed bills to address student debt. As bills like Bernie’s College for All Act and Warren’s Student Loan Debt Relief Act rise to the forefront of the conversation, they overshadow other policies that propose their own solutions.

Could addressing student debt with public policy even help?

Many experts think new public policy is not the solution, and they offer some convincing reasoning. The US government is already significantly in debt, and many worry about where they will find the resources to improve the issue.

“It's a bit troubling that legislation is not addressing the underlying problem: how people have amassed so much student loan debt in the first place,” Robert Farrington, creator of TheCollegeInvestor.com, explains. And as you will see in many of the policies outlined below, he makes an excellent point. Should policymakers influence the cost of college or employers’ requirements for secondary education? What about improving government programs already in place? Most drafted legislation proposes damage control rather than initiatives to prevent future students or workers from amassing a similar sum of debt.

Farrington believes there’s opportunity in what Americans already have. “I believe that there are already enough loan forgiveness and loan repayment programs that have been established,” he says. “They just need to work better. Make them easier to understand, open to more borrowers, and smoother to regulate.”

Stephanie Bousley, personal finance consultant and author of You Are Not Your Debt, expresses her own doubt about band-aid policies. She believes some plans are not holding the perpetrator accountable: educational institutions. “How can we encourage institutions to be more responsible both with their endowment funds and incoming annual tuition fees?” she asks. “Even if the government offers more money to qualified student borrowers, loan rates will still be double or triple to those of mortgages. It's sort of like calling in more boats to control an oil spill instead of clogging the hole.”

These stances prove to be a necessary disclaimer for the policies explained below. None of these policies solve everything. And from some viewpoints, it’s unclear if they would solve anything. But, as with all attempts at innovation, there is a graveyard of ideas laid to rest before we can exhume actionable insight. 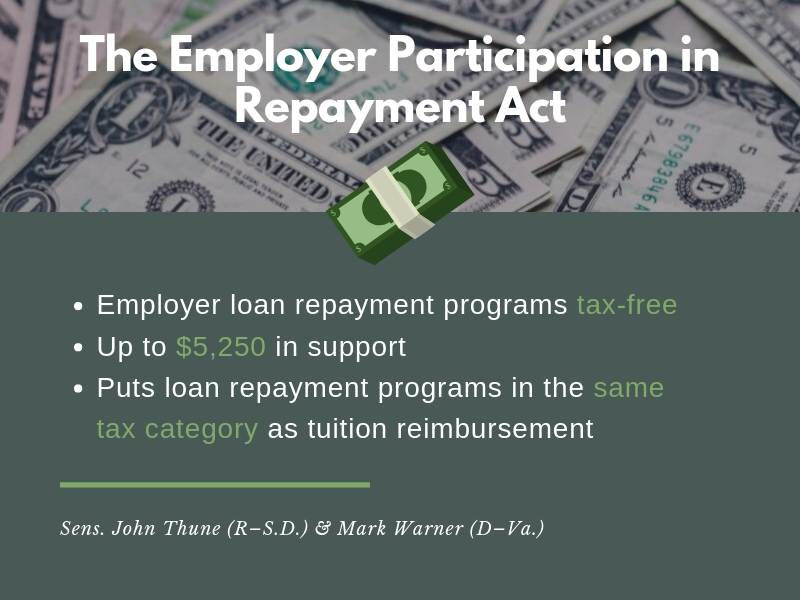 If you haven’t heard, student loan repayment is a growing HR benefit for employers looking to attract young talent. Currently, employers incur payroll taxes on any loan repayment programs, and employees have a chunk of this benefit lost through income taxes. The Employer Participation in Repayment Act incentivizes employers to provide student loan payoff benefits for their employees — up to $5,250 in support, tax-free.

Bousley supports this motion, considering it a no-brainer. “Of course student loans should be put in the same or similar category as tuition reimbursement, from a tax perspective!” she says. “It's frankly sad that it’s not already happening.”

This bipartisan bill was introduced by South Dakota Senator John Thune and Virginia Senator Mark Warner. It has nearly 150 cosponsors in Congress and nearly 30 in the Senate.

But, as with all policy proposals, there could be drawbacks. “Unfortunately, we still don't know how easy it will be for companies to implement,” Bousley explains, “nor do we know whether all companies will treat public and private student loans the same just because the government does.” Many companies don’t see an advantage in offering repayment assistance; this might not be the push they need. 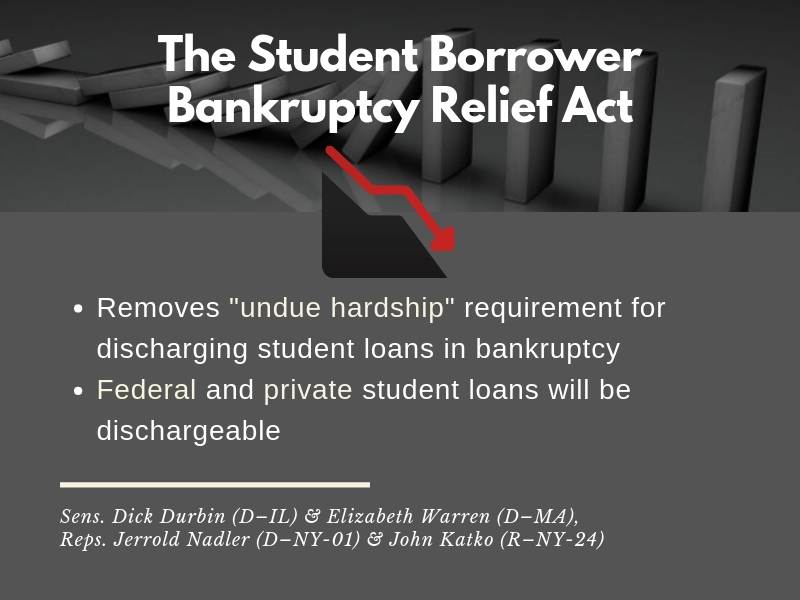 It’s estimated that 40 percent of graduates will default on their student loans by 2023. But unfortunately for them, it’s incredibly difficult to clear a student loan by defaulting and declaring bankruptcy; it involves proving “undue hardship,” a mystifyingly unclear term left to judicial interpretation.

“The Student Borrower Bankruptcy Relief Act removes the requirement that a borrower must demonstrate 'undue hardship' to discharge student loans in bankruptcy,” bankruptcy attorney and CEO of LegalAdvice.com David Reischer, Esq., explains. “Those that support the bill claim that it would increase spending and boost the economy because it would free up a lot of disposable income. It is also suggested that the threat of bankruptcy would force creditors to be more flexible with payment or settlement options.”

Student debt will no longer be the nondischargeable, ugly step-sibling to many other forms of debt. Instead, it will be treated the same as many other loan types in bankruptcy through the Student Borrower Bankruptcy Relief Act.

However, Reischer warns, “Opponents on the other side say that it would create a moral hazard and that taxpayers will end up being the guarantors for those who default.”

With this potential consequence in mind, Reischer opines that “the Student Borrower Bankruptcy Relief Act is an excellent piece of legislation if certain safeguards are put into place.” He mentions these criteria as safeguards: the borrower’s good faith effort to repay the loan; the borrower’s ability to repay the loans with their current income; their forfeiture of any current assets, as is characteristic of a typical bankruptcy; and the retention of this bankruptcy on the borrower’s credit report for 10 years.

What You Can Do for Your Country Act 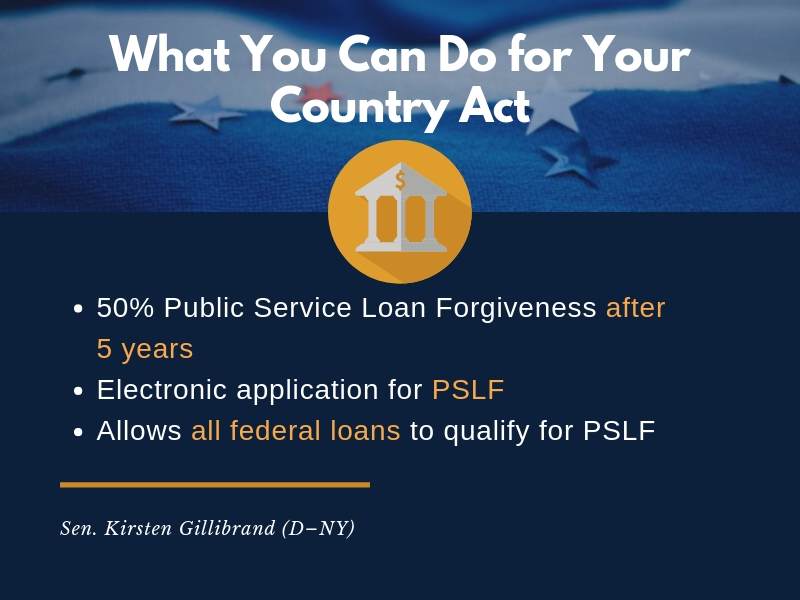 As Farrington mentioned above, the government already offers programs to aid those burdened with debt. But those programs are struggling to yield successful returns.

A swathe of Democratic Senators have collaborated on this bill that will offer 50 percent loan forgiveness after five years, introduce electronic application, and allow federal loans under any repayment plan to qualify. The hope is that improving this program will encourage more students to choose public service career paths.

“We . . . claim we will erase student loans for people working in a public service job for 10 years,” Bousley explains. “In reality, only about 1 percent of applicants are actually approved.” Removing barriers to public service loan forgiveness is critical to building a network of qualified, educated public service professionals. 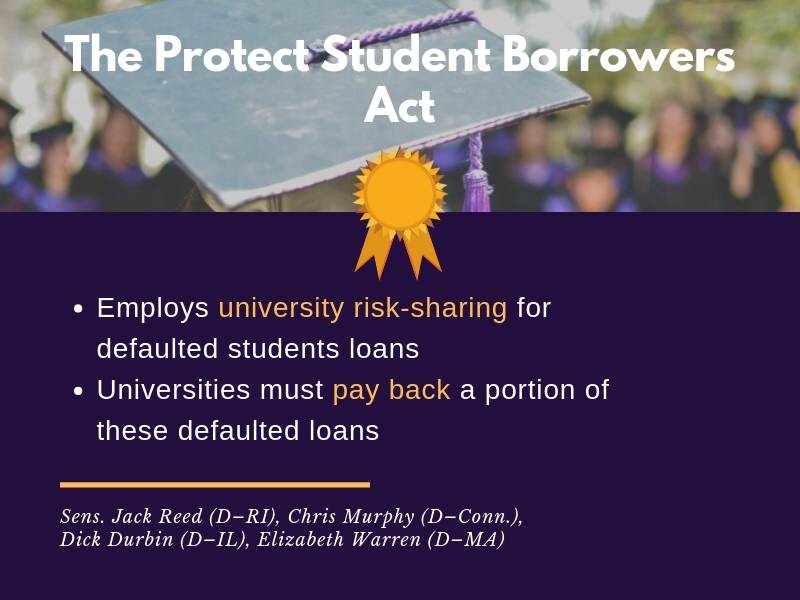 Legislators Chris Murphy, Jack Reed, Dick Durbin, and Elizabeth Warren proposed the Protect Student Borrowers Act as one of the rare bills that aims for debt prevention rather than clean-up. This one focuses on the universities Bousley mentions should be held more responsible.

The Protect Student Borrowers Act will have educational institutions risk-share with their students. Universities with a high default rate (over 15 percent) will have to pay a portion of their graduates’ defaulted student loans. These risk-share payments will be allocated to helping more students through Pell Grants and other efforts to help struggling students.

This motion suggests that secondary education is no longer being absolved from blame. Student debt policy typically targets solutions with employers, students, and families, but this act aims to encourage universities to provide ample career services, lower tuition costs, and create debt management programs to help their students succeed.

But it could come with unintended consequences, such as universities dropping degree programs they deem unprofitable or tightening their admissions. The Protect Student Borrowers Act might end up meaning less opportunity for certain groups. 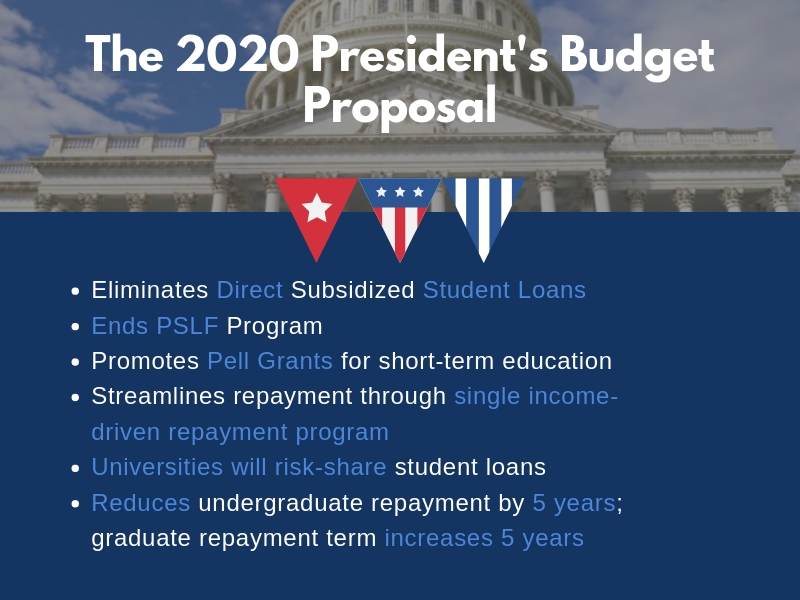 Bousley also mentions the 2020 Budget’s plans to encourage accelerated programs that will require students to take out less loans. But she also notes the catch: “Universities will still have to pay their professors and turn on the lights; unless they plan to employ fewer people and have them teach more classes. Are we prepared as a society to have a conversation about what constitutes adequate medical training or completely rethink accreditation processes? Sounds extremely time-consuming.”

The Budget also mentions risk-sharing loans that will make universities take the heat with their graduate defaulters, demonstrating a similar concept to the Protect Student Borrowers Act that colleges could be held more accountable in the future. 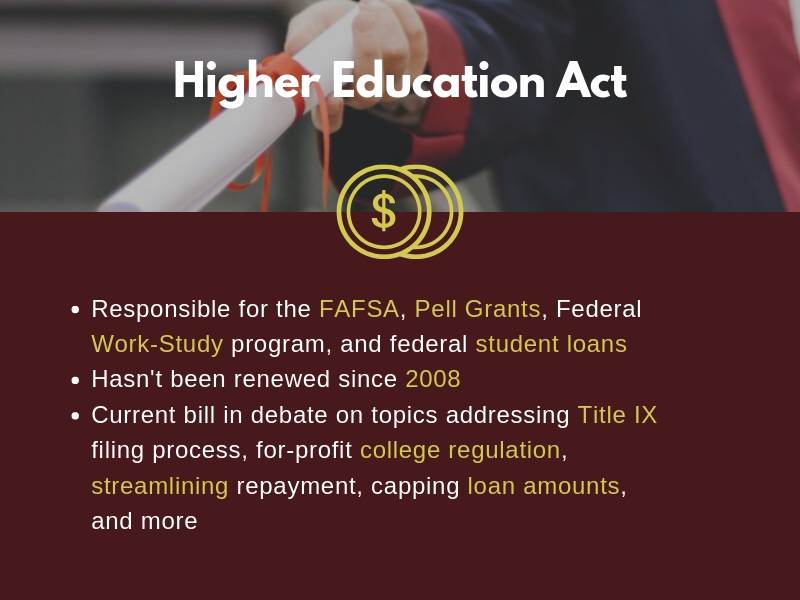 “In addition to the different proposals, the Higher Education Act is to be renewed this year,” Fred Amrein of Pay for Ed notes. “It should have been done in 2013.”

The Higher Education Act was enacted in 1965, and it’s what’s responsible for our FAFSA, Pell Grant, student loan, and work-study programs. It should be renewed every five years, but the last time it was renewed was 2008. So what’s taking so long?

Representatives are addressing the mounting challenges of college safety and financial aid, but negotiations are monotonous and tenuous. The bill should be renewed by the end of the year, but it’s already been over a decade. How much they change remains to be seen; there have been discussions over Title IX filing, for-profit college regulation, consolidating loan repayment, capping loan amounts, and more.

But what’s critical is that, unlike the other bills and proposals listed whose fates are to be determined, this one is highly likely to be renewed soon in some form. That renewal could come with some method to relieve student debt and prevent it from limiting more students’ futures.

What does all the student debt buzz mean?

With all this conversation around student debt, the visibility of the issue is alarming individuals who had no stake in the situation. “Many Americans are kind of in the dark,” Bousley says, “thinking that they are exempt from the issue if they don't personally have student loans.” We’re seeing clear warning signs that student debt is affecting the health of the economy and causing physical symptoms of stress that could influence quality of life. She warns, “It is only through making these links that student loan policy will become more talked about and lawmakers will have more public pressure to do something.”

This list included several suggestions from lawmakers who have begun feeling the public pressure, but it is not all-inclusive. The Justice for Student Borrowers Act, the PROTECT Students Act, and many others are addressing student debt. But if these bills aren’t enough, what can graduates do?

“The best thing voters extremely passionate about this issue can do is to help to educate their friends, families, and communities about all the ways student loan policy affects society beyond just education,” Bousley suggests.

In the meantime, you’re stuck paying for college the old-fashioned way, but you’re not without hope or help. Several online resources have compiled tips to manage student debt, and with all these proposed policies, it looks like we’re due for something to give — for the sake of a sustainable future, something has to. 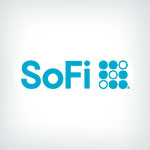