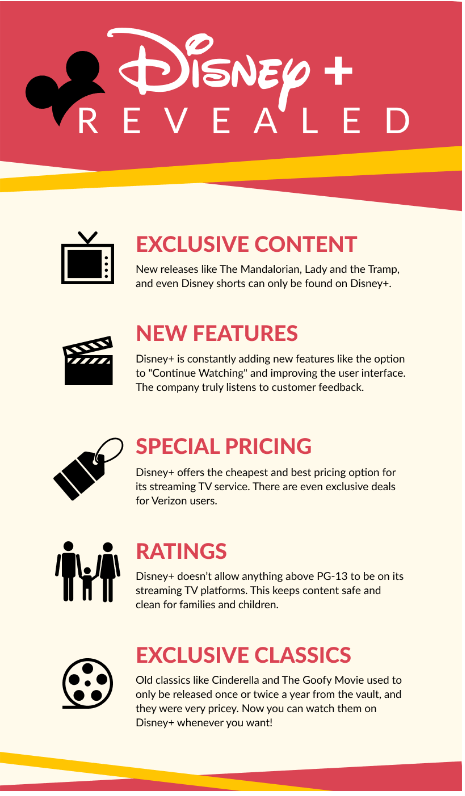 Now that Disney+ has been out for a while, it's no secret how popular it is. Disney+ signed up 28.6 million subscribers in less than three months after it was released in 2019. Out of those surveyed, 48 percent said Disney+ was "as good as" Netflix while 23 percent said Disney+ was better than Netflix. So what is seeting Disney+ apart from Netflix, Hulu, Vudu, and Amazon Prime? Read on to see what Disney+ features are drawing subscribers in increasing numbers, according to our experts.

Out of the vault classics

Disney+ is known for its exclusive classics like The Little Mermaid, Alice in Wonderland, Snow White, etc. These movies are released periodically from the vault and can be very expensive when purchasing the DVD. But now, all of these classics are on Disney+ and are available to watch anytime.

“What I love about Disney+ is that it has almost the entire library of Disney movies and TV shows. This has allowed me to relive my childhood, specifically with Disney Channel shows that I watched as a kid. I've noticed that Millennials and Gen Z are very sentimental, which is reflective of why we get so excited about opportunities to return to our childhood. Leading up to the launch of the streaming service, I was most excited about the opportunity to rewatch the TV shows from my childhood. What made me purchase it was the fact that almost the entire Disney library (and new originals) would be available from day one. “

“What I love about Disney+ is it gives me access to shows and movies that helped shaped my childhood like Cinderella, Aladdin, and That's So Raven. Disney was such a staple of my young life, and I'm so happy I get to relive that magic again. I ended up purchasing it for that reason, mainly, but also because I didn't want to feel left behind on their original shows like The Mandalorian.“

Although this feature was not originally on Disney+, now you can see where you stopped watching a movie or TV series and continue watching from that point. Subscribers will appreciate the addition of these user-friendly features.

It is also no secret that Disney+ has exclusive content that you cannot find on Netflix, Amazon Prime, Hulu, Vudu, or even in theaters. Some of these include the new Lady and the Tramp, The Mandalorian, and even reboots of Lizzie McGuire, Cheaper by the Dozen, and Home Alone which will be released next year.

“Disney+ was a delight to use from the start. I watch primarily through my Apple TV, and I was impressed by the attention to detail they put into the tvOS app. The quality of the catalog is apparent from the start. On one line were movies I loved as a kid. I started watching Robin Hood first and childhood memories of soft, colorful VHS tape cases came flooding back.

The real reason I signed up, however, was to watch The Mandalorian. And it doesn't disappoint. In fact, I’m enjoying The Mandalorian more than the recent movies. The story feels like a true personal struggle infused with adult humor and, at times, a deadly earnestness. The Mandalorian feels more like a movie than a TV show. It doesn’t disappoint in the special effects category. It’s an exciting time. At this point, I honestly can’t think of anything I’d improve. Disney+ fits in with the magical Disney experience. It reminds me why I loved the brand so much as a kid, and why I still do.”

“I downloaded Disney+ the day it launched, and I can honestly say I can't get enough of it. Here's some of my favorite things: I can watch the old classics out of the vault like Little Mermaid. Yes, I might be a 38-year-old woman, but I still love watching the Disney princess classics. It's my childhood! I have three little boys and on Friday night we have movie night. Before Disney+, I used to buy a Disney movie on Apple TV for us to watch. Now, we'll be able to pick a movie off of Disney+ not only saving me $19.99 every week, but it also encourages them to watch something we haven't seen before.”

“What I love most about Disney+ is that in addition to all of the new original content. I can watch all of the Disney Channel TV shows and DCOMs I loved as a kid. I was a huge Disney Channel fan, so being able to relive that part of my childhood as an adult brings me so much joy. It takes me back to simpler times when my biggest concern was if Miley Stewart was going to be exposed for being Hannah Montana."

Many customers love the cute shorts, like "Bao" or "Piper," that are played before a Disney movie. Usually only a few minutes long, you could only find them on exclusive Disney DVDs. With Disney +, there is a whole collection to enjoy with new ones that have never been seen before. "Forky Asks a Question" from Toy Story 4 is one of those shorts.

Disney+ launched Noelle earlier this year and brought back Mickey’s Once and Twice Upon a Christmas, which are not only childhood favorites, but great reminders of the holiday season. More Christmas specials are announced to come out in the following year.

Disney+ is also known for it's incredibly cheap deal. Being the lowest streaming service by far, Disney+ makes it affordable and the best option for families.

“We bought the three-year founder package because we are excited to show our toddlers what we loved as children. It was totally a nostalgia purchase. But after logging on and loving it, we are canceling Hulu and Sling. So it’s going to help us save money to go back to Disney World!  Win win? We love the NatGeo documentaries and so many of the Pixar shorts that were never released anywhere."

“The value of having access to all of that Disney content for such a low price just cannot be beat. Or, maybe it can when you get your first year free being a Verizon Fios customer. Ultimately, we ended up 'purchasing' Disney+ because it was included free for a service we were already paying for. We do plan to continue using the paid subscription once the year of free Disney+ ends. The only thing I would change at this point would be to reduce the occasional long load time and fix the bugs that cause the audio and video to play out of sync.”

Parents love the fact that all content is rated PG-13 and lower making it a safe viewing option for families and children. There are no worries about viewing anything unsafe for kids.

“We recently got Disney + and we are absolutely in love with it. I have three children, ages 2, 6 and 17. We love Disney + because they are our shows that everyone in the family can enjoy. It's very versatile from baby show such as Mickey Mouse Clubhouse, to older movies for my 17 year old.”

Not very many people noticed this, but Disney started releasing special trailers such as an exclusive trailer for the newly released Star Wars: The Last Skywalker. Unless you have a Disney+ account, you wouldnt even know that there was one last released trailer to hint at what would be in the last Star Wars. Other trailers pop up once in a while indicating other new shows and movies that will emerge this next year. Keep an eye out!

Disney+ is full of wonderful surprises and truly listens to customer feedback making it more and more popular. Check out other secret features like being able to choose from over 200 avatars and being able to stream up to five devices at once, all for the same incredible deal of $6.99 per month.

Christmas Movies Through the Ages

It's no secret that Christmas movies have been changing from the classics to what we find on streaming platforms today....