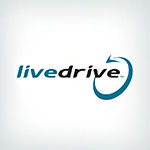 LiveDrive was founded in 2008 and is headquartered in the United Kingdom. The company, in turn, is owned by J2 Global. LiveDrive is one of J2 Global’s many brands which include: Campaigner, eVoice, Electric Mail, MyFax, eFax, eFax Corporate, and FuseMail, to name a few.

Livedrive sells its backup services to individuals and businesses as well as offering it for a white label product for resellers, with several options for branding with resellers. Backup Lizard is among the top performers of their resellers and is also reviewed by the Review Team.

Users can add options to their subscription, which are subject to additional fees.

Livedrive keeps the last 30 versions of previously backed up files for 30 days for users to download, should there be a need. If Livedrive detects that a file has been deleted from the user's hard drive, the software automatically (and without warning) deletes the file in the backup folder. The backup functionality of the software is not meant to be used as archiving, so users need to keep files on their hard drive to avoid loss. Livedrive's mirror backup is better explained by Backup Lizard on their site than on Livedrive's.

Livedrive includes apps for iOS, Android and Windows mobile devices. Their files are compatible with Blackberry as well. Backup Plan's subscribers do not have the functionality to upload photos or videos from their mobile device, as are those with either of the other plans. Backup users are able to view their files only from their mobile device. The most significant difference for those not subscribing to the Backup Plan is the inclusion of editing documents in a web browser. Subscribers for all plans are able to view their photos or movies either online or with their mobile app.

Users can backup a network drive for an additional fee per month. All media files (photos, music and movies) can be watched from any device with the mobile app or web browser.

Livedrive offers its customers a full-featured 14-day free trial for any of their plans. There is no risk involved, and unlike many of their competitors, Livedrive states that they do not require that users provide a billing address in order to receive a free trial. However, users are asked to enter a credit card after signing up "to verify their account." This behavior of a bait-and-switch is troublesome and leaves people wondering what other surprises they have coming as subscribers.

Livedrive's backups are done differently than many others. Users select the files/folders which they want backed up and then upload these files to the Livedrive drive, which appears like another drive on their computer. After this initial (and often large) upload, the files are monitored by the system, and any of them which have changed are uploaded. This process allows users to have backups performed as they are needed, rather than needing to remember which files that they have changed and scheduling a backup. As such, these backups are not scheduled or performed manually, like many others. Another advantage to incremental backups is that there are smaller files being transmitted regularly, and less resource demand is placed upon the computer which keeps it running more quickly.

File sharing is only available to subscribers of the Briefcase and Pro Plans. Neither of these includes password protection for files, but files can be designated as either public or private files and sharing Users of these plans are also able to edit their files from a web browser.

The Review Team uses independent speed and performance test results when comparing companies to each other. If there are several results, the Review Team averages the results for rating a company. Speed and performance tests were given by uploading a 100MB folder of mixed files to simulate an average customer upload. As Livedrive requires an initial upload of files, this test is only an indicator of possible performance might be for this task. Incremental backups were not tested. Livedrive's performance for large uploads was significantly slower than industry leaders, in spite of their claim of fast servers. Server speed is only one aspect of how fast software is able to upload data. Of equal effect is the user's ISP upload speed. Users report that the software is heavily resource-dependent for restoration, with resource demands being anywhere from 20-80% of a computer's available resources.

Livedrive does not disclose its security protocol online other than stating that it is "completely safe and secure." Attempts to gather this information from the company were not successful. Because Backup Lizard resells Livedrive, the Review Team can safely assume that they use the same encryption for their resellers as for their direct customers. Backup Lizard states that files are encrypted with the AES-256 encryption protocol. As the company does not disclose this information themselves, the Review Team is considering the lack of transparency and reply from the company in the rating for this criterion. The security they offer is aligned with industry leaders, but their lack of providing this information is not.

LiveDrive offers several notable features, but their lack of communication and reports of customers losing their accounts are enough for the Review Team to recommend against using them as a backup service provider. For those who are set upon the available features offered by Livedrive, the Review Team recommends selecting Backup Lizard, but with the disclosure that there are many of the same concerns with Backup Lizard which exist about Livedrive.