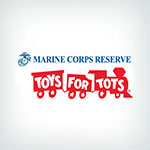 star star star star star_border
24 User Reviews
Good
Bad
Bottom Line
Reviews
Write a Review
LAST UPDATED: November 3rd, 2021
In 1947, Major Bill Hendricks, USMCR (United States Marine Corps Reserve) and Lieutenant Colonel John Hampton began to collect toys for those in need. It was after Hendricks' wife could not find a charity to donate a handmade Raggedy Ann doll to a child at Christmas. Mrs. Hendricks suggested that the USMCR begin a toy drive to connect donated toys with those in need. Their initial toy drive resulted in 5,000 toys being collected for underprivileged children. Toys for Tots was nationally launched in 1948 and has had momentous growth since. Currently, Marine Toys for Tots Foundation is headquartered in Triangle, Virginia. In 2015, the Marine Toys for Tots program collected and distributed 18 million toys to 7 million children in 782 communities. Marine Toys for Tots Literacy Program, in a partnership with The UPS Stores, raised over $319,000 and distributed over 3 million books to public schools and children in financially-depressed areas.

Whenever possible, the Review Team uses information which was reported to the Internal Revenue Service on Form 990. Many organizations do not publish past years of their IRS Form 990. Marine Toy for Tots Foundation has published several past years of this form online. As with most organizations, annual revenue and donations for Marine Toys for Tots Foundation is affected by economic fluctuations. Donations to the organization have varied year-by-year, but the general amount collected over the last four years, according to reported income on IRS Form 990 are reported as follows:

According to Marine Toys for Tots Foundation's 2015 Form 990, their CEO, H.P. Osman, has a reported annual salary of $270,500. The organization has a surprisingly low number of paid employees, with less that 20 reported on its 2015 IRS Form 990. Those working to implement the program are members of the United States Marine Corps Reserve and other volunteers. The total administrative expenses reported in 2015 is $4,288,004.

Marine Toys for Tots Foundation reported fundraising expenses of $6,177,547 on its 2015 IRS Form 990. The fundraising budget was .02 percent of their total income for the year. Marine Toys for Tots benefits from the widespread familiarity of their organization by not having to dedicate significant resources toward public relations and fundraising. This percentage places the organization among the top tier of charities as far as the company's income-to-fundraising ratio.

The percentage of revenue which goes back into the program for Marine Toys for Tots Foundation is outstanding in comparison with many other organizations. For every dollar raised, 97 cents is used for program costs. As a reference point, watchdog Charity Watch considers an organization a Top Rated Charity if an organization uses 80 percent of its income to provide its service. Marine Toys for Tots is very effective in program delivery and fiscal responsibility.

There is little/no reliable negative press stories about Marine Toys for Tots Foundation. Two exceptions are a satirical piece as well as an op-ed written about the organization. The satire was published stating that Michelle Obama's support for Toys for Tots included the executive (i.e. Presidential) requirement that all gift packages delivered by Marine Toys for Tots include a copy of the Koran, which resulted in the resignation of the CEO of Toys for Tots. This story is false in that while Mrs. Obama did support the organization, there was no such Executive Order by President Obama, nor did the CEO resign. This story has taken many forms, one of which included the allegation that the organization did not accept donations of Jesus dolls from a Christian church (unnamed), stating that religious items could not be distributed. An op-ed piece about Marine Toys for Tots Foundation was published on December 22, 2010, by Open Media Boston, wherein the organization was criticized for their apparent hypocrisy in that members of the military routinely kill children during operations overseas, yet act as Santa at home. This piece was strictly opinion, and offensive to many members of the military and their families.

Online donors receive a receipt for their tax-deductible organization as well as newsletter announcements. Some report that the communications coming from Marine Toys for Tots in further years are excessive and irritating. This cannot be substantiated, but as the organization's fundraising budget is such a low percentage annually, this anecdotal evidence is questionable. Those who support Marine Toys for Tots by donating toys do not receive a tax-deductible receipt, but can claim the gift on their taxes. The Review Team does not give tax advice, and anyone with questions should consult their tax professional.
gavel

Those looking for a charitable organization which does not have significant administrative costs and reasonably-paid executives with responsible fiscal practices should consider giving to Marine Toys for Tots Foundation. The organization has been giving hope to children at Christmas for nearly 70 years and is regularly recognized as a high-quality charity. For those wanting to have documentation of their gift for tax purposes are advised to donate online rather than at a drop box; however, the holiday spirit of giving anonymously is recognition enough for many. The Review Team recommends Marine Toys for Tots for its efficiency in delivering hope to underprivileged children.
Was this content helpful?
thumb_up Yes thumb_down No
border_color Write a Review

I signed up toys for tots this year because I honestly need help getting my daughter a few things. On the web site it clearly said to age 14. I received a conformation email telling me the day and time to pick her toy up. So that Mon the 16th came I stood in the line outside early. It was freezing out. Because it's nj .I made it inside gave the lady my and my daughters info she said I couldn't get anything .because she's 13 I was so hurt I said she just turned 13 she said we only have donations for 12year olds.. I almost cried.