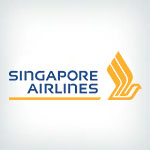 # Destinations:
Checked Bags:
Yes
Carry-On Bags:
Wi-Fi:
In-Flight Entertainment:
Food & Beverages:
Travel Insurance:
Yes
Rewards Program?
Unknown
Time in Business
49 Years
Number of Reviews 8
LAST UPDATED: February 19th, 2020
Singapore Airlines is a company that has been in business for a very long time. Starting in the 1940’s as Malayan Airways, they have grown into a modern airline company. Although this airline company is not as large as some of their big name competitors, Singapore Airlines keeps up with the modern online world on the airline industry.

As a smaller airline company, Singapore Airlines does not have as many flights as some of the larger names in the industry. These means that the flights they do offer are very specific and the cost does not vary as it would with larger companies such as Delta or American Airlines whose ticket prices can change daily. In comparison to these companies, however, Singapore Airlines has competitive ticket prices. Though the flights are fewer and farther between, their pricing is often cheaper than other airline companies in the industry. Along with their cheaper ticket pricing, Singapore Airlines also offers their customers special deals for flying with them, and for being returning customers. These deals often include even cheaper ticket prices. Most airlines have similar bag checking policies and very few vary from these standards. The difference comes in the price airlines charge for baggage that exceeds the standard amount allowed which are generally two bags per customers that cannot weigh over seventy pounds each. Singapore Airlines follows these guidelines and as for customer's excess baggage, they charge based on the weight on the bags. As the weight goes up, so does the extra charge for the baggage. On average, customers can expect to pay an extra hundred dollars or more for bringing more than the allotted amount of baggage. Singapore Airlines also makes this information easily accessible with a chart that is clearly laid out for customers who know in advance that they will exceed the baggage policy. Location also plays a factor with the cost of extra bags. Depending on where a customer is flying out of, the price of their extra baggage can be different. This is due to the different rules and regulations each country has set on bag checking policies. Singapore Airlines tries their best to make customers as comfortable as possible during the entire boarding process. One of the great benefits they offer to their customers is their boarding pass deals. These deals come from having a boarding pass through Singapore Airlines, and getting exclusive deals and discounts through select locations prior to the actual flight. Another convenience that is provided to customers of Singapore Airlines is the ability to check in for a flight either online, on a mobile device or at the airport itself. This allows flexibility for customers with busy schedules and allows the company to best fit all of their client's different needs. Like many other airline companies, Singapore Airlines also has several different lounge options for higher cabin class customers who are waiting for their flights. Even though the flight list for Singapore Airlines is small, the on-time percentage values for the company are excellent. Singapore Airlines has an eighty-three percent on-time average for all of their flights according to Flightstats.com. They also have low statistics on late flights, cancelled flights and diverted flights, which means that customers can count on Singapore Airlines for keeping a tight schedule and getting their customers to their destinations on time. A side note to add to this, however, is that in a list showing the most active flights for the company, the most active flight is within Singapore. Few flights go further and the ones that do, do not often come to the United States. Singapore Airlines has a long, rich history and has come a long way in trying to keep up with the modern day airline world. The company began long ago in the 1940's as Malayan Airways. It wasn't until 1972 that their name was changed and they became a more specific airline company called Singapore Airlines. The company has changed and moved with the times as it has grown into the airline business it is today. With such a long history, the company has made many strides to being a great airline competitor. More recently they have developed the first all business non-stop flights from Singapore to New York and Los Angeles. These kinds of demonstrations show that Singapore Airlines tries to keep up with the modern airline industry by staying innovative and proving the best for their customers needs.
thumb_down

As mentioned before, Singapore Airlines is a smaller airline company that does not offer as many flights as many of their competition in the industry. Singapore Airlines travels to sixty different cities in over thirty countries across the world. Their locations include cities in Southeast Asia, South Asia, Australia and New Zeland, North Asia, Europe, the Americas, West Asia and Africa. Within the United States, Singapore Airlines flies into Houston, Los Angeles, New York, San Francisco, and Sao Paulo. Although it should be noted, that not all of these locations are available all the time for flights. The airline company will give a range of dates that these locations will be available but there is only that window of time, for a customer to use a certain destination until Singapore Airlines flies to the location again. Compared to other airlines, the list of destinations through Singapore Airlines is very small and it does not offer the flexibility that many other airline companies in the industry have the advantage of offering to their customers. The in-flight services offered through Singapore Airlines are comparable to the bigger name airline companies in the industry. Singapore Airlines offers entertainment, dining services and even suited depending on a customer's cabin class. For entertainment, customers have choices between movies, television programs, music, and games. All of these entertainment choices are offered through on screen devices located on passengers seats and controlled by handheld modern day technology remotes. The dining services vary depending on cabin class but each cuisine is specially made to reflect the culinary influences of the regions to which they are flying. Singapore Airlines also gives customers the opportunity to pre-order their meal before their flight ensuring they receive exactly what they during their Singapore Airline experience. They also cater to special dietary restrictions as well as special meals for baby, infants and children. When compared to other airlines these in-flight services are standard and can be found across many different companies. However, it is still important that Singapore Airlines offers the services as it show they are competitive in their customer service.
gavel

Singapore Airlines is a good, not great, option for flying. The have decent prices, in-flight entertainment, and are consistently on-time. However, because of their limited destinations and daily flights, we do not recommend them at this time.
Was this content helpful?
thumb_up Yes thumb_down No
border_color Write a Review

One of the words great airlines. I’ve flown SQ for many years. If you fly SQ, you’re likely going to SE Asia, so for the average American, you might think it’s very limited. Same thing if you’re in Singapore, most of the American flights are going to the US. Dah. SQ is the class of airlines that everyone else has been chasing for years. They just keep raising the bar to stay ahead. There are some things to be aware of. If you’re flying coach, Singapore is a very long flight no matter where you started. Several of the SQ flights have this little foot rest. If you’re 5’ tall, it’s nice to have somewhere other than the floor to put your feet. However, if you’re over 6’, this foot rest is useless or worse yet, folded up into your shin for 16 hours flight time. Many if the flights depart from the US at night. If you stop to think about it, it’s a really good thing as you’ll get a bite to eat, then want to sleep once on board. This schedule also gets you into SIN in the morning time so you’ll have the day to do something. Customer service is excellent. The number of times SQ has bent over backwards to correct for something thst went wrong with an incoming UA flight is amazing. They understand you fly SQ because they will take care of you. For those that have way to many miles or money to spend, the first class experience is impressive. I’ve caught myself day dreaming how nice if my living room were as nice then realized at that price, it better be. Their new A350 fleet is very nice. I appreciate the increased cabin pressure and humidity. My jet lag experience is much better.

I've flown with Singapore Airlines a few different times and it is hands down the best airline I've ever flown with. The experience felt more upper end than other airlines I've flown internationally with and the flight attendants take good care of you.

Flight attendants are always going around to make sure passengers are always comfortable with extra food or all kinds of drinks. More comfortable seats. Also they clean the toilet area all the time

Singapore Airlines is the best airline I have ever flown on. I had a problem with my flight and ticket on an international flight with Singapore Airlines. The customer service was exceptional and they went the extra mile to help me work out the problem.

Flew from San Francisco to Jakarta, Indonesia. When you spend 20 hours on a flight and you feel right at home and the flight was easy that is saying something. Service was amazing!

Singapore Airlines is my favorite airline! They have amazing customer service and really go the extra mile to make sure passengers are comfortable and happy.

Singapore Airlines is my favorite airline! They have exceptional customer service and go above and beyond to provide a great travel experience to customers.

Singapore Airlines has the best customer service out there and my experience on their flights has always been spectacular. I fly them whenever I can.