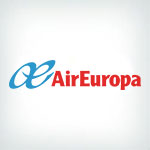 star_border star_border star_border star_border star_border
0 User Reviews
Good
Bad
Bottom Line
Reviews
Write a Review
LAST UPDATED: June 27th, 2019
Air Europa was created in 1986 and began operating scheduled domestic flights in 1993. Two years later, in 1995, flights were established to London and New York, which opened Air Europa to the scheduled international flight market. Within a year, the company operated over 750 scheduled flights each week. Later, in 2005, Air Europa became the first Spanish airline to make direct flights to China. By the end of 2006 the company had acquired 37 aircraft and had carried over nine million passengers. Today Air Europa’s fleet is made up of 45 aircraft—14 Airbus, 20 Boeing and 11 Embraer—and is considered to be one of the youngest fleets in the world.

Air Europa began in 1986, which means that it has not been in business for as long as many of its competitors.

There are many more pros to flying with Air Europa than cons. This airline offers an impressive number of destinations, a menu with plenty of tasty options, and a free-to-join rewards program. Not to mention free checked baggage as a huge bonus in value to your flying experience. There is no reason to believe a flight with Air Europe would be anything but comfortable and hassle-free.
Was this content helpful?
thumb_up Yes thumb_down No
border_color Write a Review